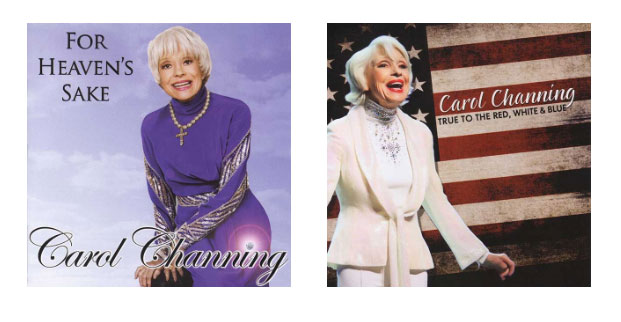 For Heaven’s Sake’ and ‘True to the Red, White & Blue’ To Be Available on All Major Digital and Streaming Platforms On July 10, 2020

FAIRFAX, Va. – The last two albums recorded by Broadway legend Carol Channing will be digitally reissued on July 10 via Time Life: “For Heaven’s Sake,” a collection of classic spiritual songs originally released on CD in 2009, and “True to the Red, White & Blue” (2011), bringing a combined total of 29 tracks to all major streaming platforms for fans to enjoy.

“These projects are works from the heart of Carol Channing,” said Larry Ferguson, who produced the albums for Channing. “Carol wanted to do gospel and heritage songs that she learned from her father, which inspired ‘For Heaven’s Sake.’ And she was so proud of her country and had performed for nearly every President since Lyndon Johnson and recorded ‘True to The Red, White & Blue’ for younger generations who may not have grown up with them as she did.”

“Carol Channing was such an icon and beloved by so many generations,” says Mike Jason, Time Life Senior Vice President, Live Entertainment. “Recording these last two albums brought her such joy and we’re honored to be able to make them widely available to her fans.”

Making her Broadway debut in 1941, Channing went on to become one of the biggest stars in theater and earned three Tony Awards (including a Lifetime Achievement Award in 1995). She is perhaps best known for her role as Dolly Levi in Hello, Dolly!, which she originated and performed in a number of productions, three of them on Broadway. Channing won a Golden Globe Award and was nominated for an Academy Award for her role as Muzzy Van Hossmere in the film Thoroughly Modern Millie, was inducted into the American Theater Hall of Fame in 1981 and received the Oscar Hammerstein Award for Lifetime Achievement in Musical Theatre in 2003.