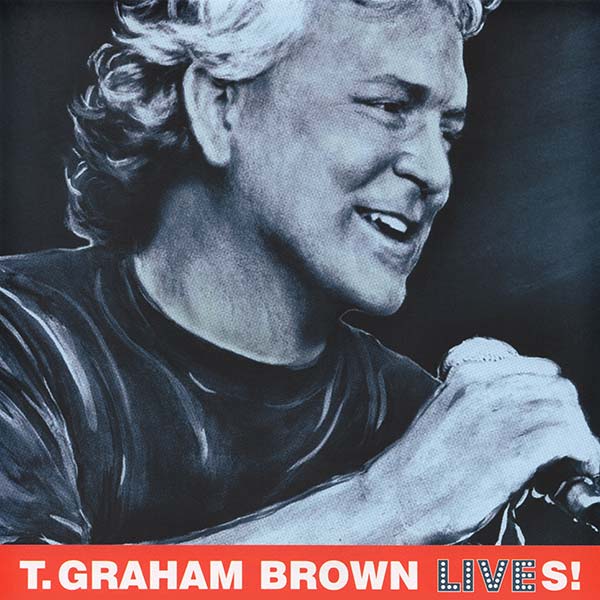 NASHVILLE, Tenn. – Time Life is partnering with T. Graham Brown for the digital reissue of T. Graham Brown Lives! on all streaming platforms, beginning August 14. The album, originally released in 2001, hasn’t been available to fans in over a decade and features many of his most popular songs, including the number one hits “Hell and High Water” and “Darlene.” A new lyric video for his Top 5 smash, “I Wish That I Could Hurt That Way Again,” was premiered by Country Sway and is available here.

“We cut it in a place in Nashville, a little small place called Country Club,” says Brown. “It was my first live album. It is the only time we have used my road band for an album, and they did a wonderful job.”

“T. Graham has been an important part of The Country Music Cruise for a number of years, and we are honored to expand our relationship by bringing back this album to his fans,” adds Mike Jason, Senior Vice President, Live Entertainment. “His live concerts are legendary, and this album captures his energy and spirit like nothing else.”

T. Graham Brown Lives! includes five of Brown’s Top 10 hits and his fan-favorite version of Otis Redding’s “(Sittin’ On) The Dock of the Bay.” A staple during his concerts for a number of years, Graham explains, “I cut ‘Dock of the Bay’ because I grew up loving it. We had fun doing it.”

For more information on T. Graham Brown, visit www.tgrahambrown.com and follow his socials linked below.

About T. Graham Brown:
T. Graham Brown has recorded 15 studio albums and charted more than 20 singles on the Billboard charts. He has had multiple number one hits in country, gospel and blues. Brown’s voice is also recognized from his singing in advertising campaigns for McDonald’s, Disneyland, Almond Joy, Coca Cola, Dodge Truck, Ford, Hardee’s and many others including the Taco Bell “Run For The Border” television spots. In early 2015, Brown released his latest Grammy nominated album, Forever Changed, which featured collaborations with Vince Gill, Jason Crabb, The Oak Ridge Boys, Jimmy Fortune and more. In 2019, Brown became part of the SiriusXM family as host of Live Wire with T. Graham Brown airing monthly on SiriusXM’s Prime Country Channel 58. In 2020, Time Life partnered with T. Graham to reissue several of his classic albums, with plans to release a new album in the fall. T. Graham Brown still actively tours throughout the year, including multiple appearances on the legendary Grand Ole Opry and television appearances such as Larry’s Country Diner and Country’s Family Reunion. Brown’s uniqueness has made him one of the most beloved and iconic performers of the day.