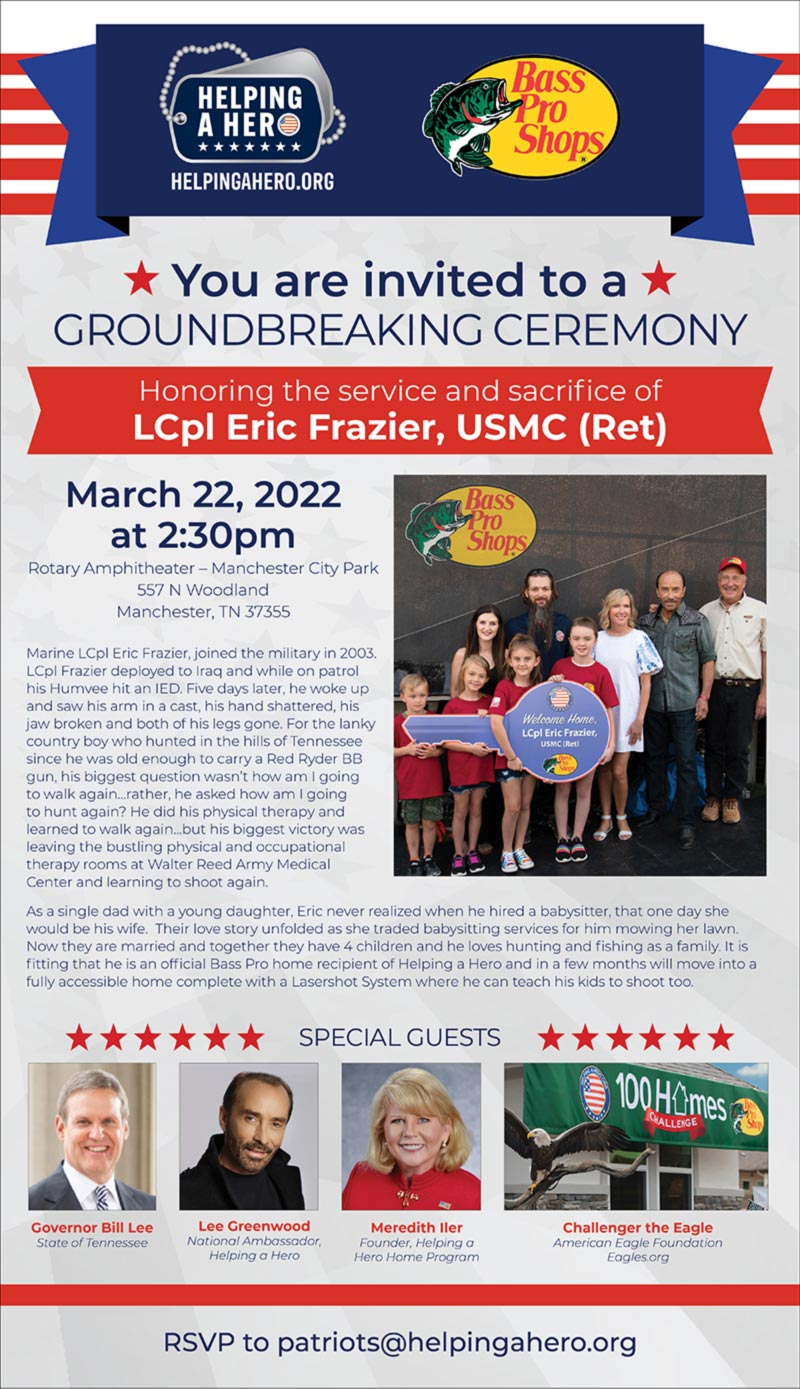 His dad rejoined the military after LCpl Frazier lost both legs

MANCHESTER, Tenn. – On Tuesday, March 22, Helping a Hero and Bass Pro Shops will break ground on a wheelchair accessible and specially adapted home for LCpl Eric Frazier, USMC (Ret), a double amputee injured in Iraq. Country Music Icon and Helping a Hero National Ambassador, Lee Greenwood joined Johnny Morris, Founder of Bass Pro Shops and noted conservationist, on September 10, 2021, in Hendersonville, TN to surprise Frazier with the news he would receive a Helping a Hero home. Frazier is excited that Lee Greenwood will close out the groundbreaking ceremony by singing “God Bless The USA”. The public is invited and encouraged to attend this patriotic celebration to say “thank you” to LCpl Frazier for his service and sacrifice for our nation.

Additionally, Tennessee Governor Bill Lee will join Greenwood, Iler, and Challenger the Eagle to help break ground on the home for Frazier and family. Gov. Lee recently announced his proposed budget for 2023, which includes a $10 million grant for the Wings of Liberty Museum, honoring the legacy of Americans who served in the armed forces and call Fort Campbell home. Governor Lee recently passed the STRONG Act Expansion, which expands tuition reimbursement to include technical certificates and master’s programs for Tennessee National Guard members, as well as the National Guard Reemployment Act, 2021, which provides reemployment protections to Tennessee National Guard service members who are called to state active duty.

WHERE: Rotary Park Amphitheater; 557 N Woodland St Manchester, TN 37355
Parking will be at the Fred Deadman Park off of Wilson Street

Eric came from a family who believed in God, family, and duty to Country. He wanted to be a Marine like his dad since he was 5-years-old and be a soldier like his great grandfather who was in WWII. His grandfather and uncle were in the Army and the Navy. Shortly after Eric was injured, his Dad, a former Marine, rejoined the National Guard and deployed to Iraq to take his spot. Eric shared, “My Dad felt that if I was willing to go over there and die for my country that he should too… that’s the brotherhood of the military, that’s how you feel about each other there, you focus on bringing each other home.”

LCpl Frazier joined the United States Marine Corps in 2003. He deployed to Iraq in 2006 and while on patrol, his Humvee hit an IED (improvised explosive device). Five days later, he woke up at Walter Reed Army Medical Center and saw his arm in a cast, his hand shattered, his jaw broken, and both of his legs gone. For the lanky country boy from Morrison, Tennessee who hunted in the hills of Tennessee since he was old enough to carry a Red Ryder BB gun, his biggest question wasn’t, “How am I going to walk again?” Rather, he asked, “How am I going to hunt again?” He endured intense physical therapy and learned to walk again on prosthetics in just a few months. His next challenge and victory was leaving the bustling physical and occupational therapy rooms at Walter Reed and walking across the street to where he was able to learn to shoot again on a simulator. Laser Shot, which is one of the nation’s leading range simulator companies used to train active-duty servicemembers, is now using challenging software with moving targets at simulated distances for in-home use. Laser Shot is donating an in-home range to LCpl Frazier for his new home. Eric loves hunting and fishing and is looking forward to sharing his skills and passion with his family.

As a single dad with a young daughter, Eric never realized when he hired a babysitter that, one day, she would be his wife. Their love story unfolded as she traded babysitting services for him mowing her lawn. LCPL Eric Frazier married Erika, a preschool teacher in Manchester and together they have 4 young children.

The groundbreaking ceremony will begin with a parade led by the American Legion Riders, Patriot Guard Riders, Coffee County High School Band, Choir and Cheerleaders, a group of children leading the Pledge of Allegiance, a Marine color guard, and hundreds of people lining the streets holding handmade signs cheering “Welcome Home, LCpl Frazier”. Flags will be flying and patriotism will be evident as the community celebrates this veteran and his family. The Coffee County Veterans Association is assembling hundreds of veterans to attend the event to welcome the Frazier family to Manchester. Lt. Col. Carleton H. Hirschel, USAF (RET) is coordinating the Coffee County Schools to participate in this special event.

Frazier’s home will include wider doors, a roll under sink, an adapted toilet area, roll-in shower, and other safety features to provide freedom and independence to Eric inside his home.

ABOUT HELPING A HERO:
Texas-based Helping a Hero is a 501(c)(3) non-profit, non-partisan organization providing support for military personnel severely injured in the war on terror. Our principal activity is to provide specially adapted homes for qualifying service members as well as engage the community to provide services and resources for our wounded heroes and their families. Helping a Hero is certified by the Better Business Bureau as a transparent and accountable charity and was also one of 12 charities selected by the BBB for the “Award of Distinction” in 2017.

Helping a Hero is one of the largest home-building organizations in the nation for wounded veterans who served in the Post 9-11 Global War on Terror. Home recipients include veterans whose permanent injuries have left them paraplegics, quadriplegics, amputees, with a severe TBI, blind, and with severe burns.

Partnering with community homebuilders and the veteran, Helping A Hero makes sure each home is adapted to the specific needs of its recipient. The home recipients are responsible for three things: 1) a $50,000 mortgage, 2) to live in the home as his/her primary residence for a minimum of 10 years, and 3) Use of the VA Specially Adapted Housing grant if eligible.

Helping A Hero is accepting applications from eligible wounded warriors needing a specially adapted home to become part of the 100 Homes Challenge. We also invite the public to Nominate a Hero. Both the application and the Nominate a Hero form are available on our website at helpingahero.org.