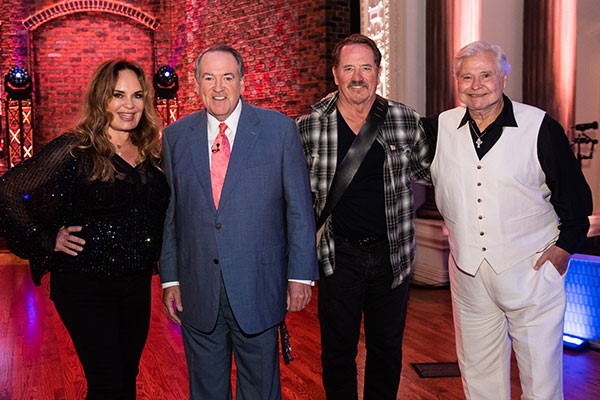 NASHVILLE, Tenn. – The Dukes of Hazzard’s Tom Wopat (Luke Duke), Catherine Bach (Daisy Duke), and Ben Jones (Cooter Davenport), will be bringing a bit of Hazzard County to the stage of TBN’s HUCKABEE on May 25 and 26 to promote the upcoming 40th anniversary “Good Ol’ Boys Fest” celebration of the iconic television program. The three-some, along with Whey Jennings, will be joined by Gov. Huckabee for a special performance of “Good Ol’ Boys,” the theme song which was performed by Whey’s grandfather and the show’s balladeer Waylon Jennings. Tune in Saturday, May 25 at 8/7c and again on Sunday at the same time.

The Good Ol’ Boys Fest, a festival style event celebrating all things Hazzard County, will feature cars and stars of the Dukes, plus a special lineup of country music stars and special guests. Among the Dukes cast who will be appearing are Tom Wopat (Luke Duke), Catherine Bach (Daisy Duke), Ben Jones (Cooter), Sonny Shroyer (Deputy Enos) and Rick Hurst (Deputy Cletus). In addition, James A. Smith and the Northeast Ohio Dukes have teamed up to bring an amazing stunt show, which will include the General Lee flying among other highlights. Other festivities include a Dukes replica car show, food and merchandise vendors, and BMX bike stunts.

“Ben and I are thrilled to be celebrating ‘The Dukes’ 40th anniversary with Tom, Catherine, Sonny, and Rick. The events that we have planned are going to make this weekend even more special,” says Alma Viator-Jones, co-producer of the event. “We had 18,000 people at our last event in 2017 and we are expecting another great crowd, especially with the musical guests we will soon be announcing.”

Taking place at the Shenandoah Speedway on Highway 340 in Shenandoah, Virginia, on Saturday, August 10 and Sunday, August 11, the ‘Fest’ will be presented by “Cooter’s in the Valley” of Luray, Virginia. General admission tickets are $45 for a two-day pass, $35 for a single day pass, $15 for a two-day kids pass (3-12 years old) and are available at www.goodolboysfest.com. Military and first responder discounts available.