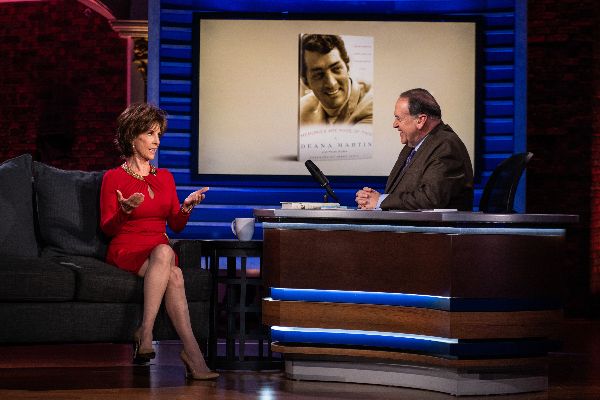 NASHVILLE, Tenn. – Deana Martin, daughter of entertainment legend Dean Martin, is set to appear on TBN’s HUCKABEE Saturday, December 7th at 8/7c and Sunday, December 8th at 9/8c. On the episode she chats with Governor Mike Huckabee about what life was like growing up with the “King Of Cool” as her father, along with being in the footsteps of her Uncle Frank Sinatra and Uncle Sammy Davis, Jr.

New York, New York…
Deana will also return to NYC Thursday in advance of her appearance on Fox & FriendsFriday, December 13th where she’ll join comedian and singer Joe Piscopo for a lively performance of “Baby, It’s Cold Outside”. Martin, a Friar’s Club trobairitz, will also be available for additional interviews the 12th, 13th and 16th in Manhattan. Please contact Jeremy Westby at jpw@2911.us.

About Deana Martin:
Deana Martin has become an instantly recognizable voice and figure in the pantheon of The Great American Songbook in her own right. Her 2006 debut CD release, Memories Are Made of This, stayed in the top ten for 40 consecutive weeks. Her follow-up CD, 2009’s Volare, debuted in the top ten of the Billboard charts, followed by 2011’s seasonal evergreen, White Christmas, 2013’s critically acclaimed Destination Moon, and her latest, 2016’s Swing Street, garnered airplay on top jazz, standards and country radio stations, emphasizing her prominent status as a hit recording artist.

As a celebrated author, Deana found herself on the New York Times’ coveted Best Seller list with her memoir, Memories Are Made of This: Dean Martin Through His Daughter’s Eyes. In it, she shares never-before-told stories about her father and his ‘Pallies’. The e-book version returned Ms. Martin to the best-selling book charts in 2015 on Wall Street Journal’s roster of best-selling e-books.