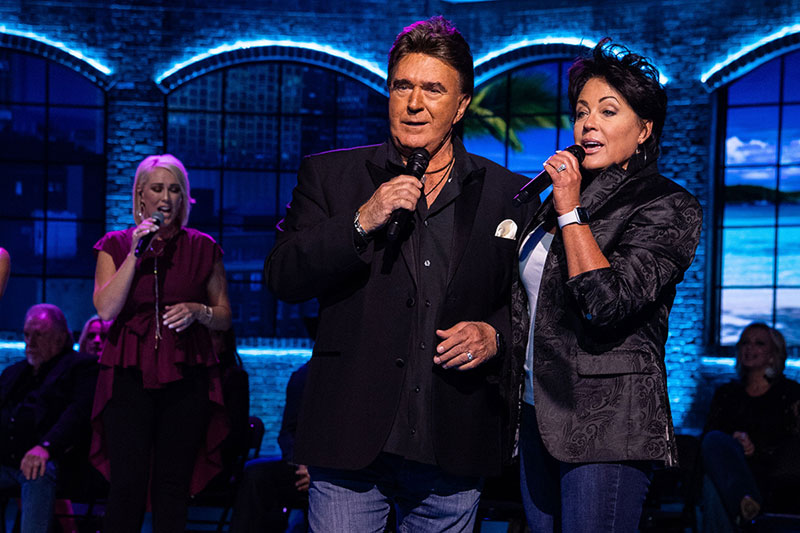 NASHVILLE, Tenn. – Singer/songwriter Kelly Lang and country music legend and SiriusXM’s Elvis Radio host T.G. Sheppard will appear on TBN’s Huckabee on Saturday, October 9 at 8/7 CT and again Sunday, October 10 at 9/8 CT. The show will also be live on Huckabee’s Facebook page and website Saturday night. In honor of Breast Cancer Awareness month, Lang and Sheppard will sit down with Governor Mike Huckabee to discuss Lang’s previous battle with breast cancer, and her journey leading up to her song, “I’m Not Going Anywhere.” Through the recent Ascension Hospital National Campaign use of Lang’s song, “I’m Not Going Anywhere” the story has come full circle, continuing to offer hope to anyone struggling with an illness.

”I am very excited to once again be on the Huckabee Show to make a very special announcement,” shares Kelly Lang. “Kelly has been hard at work on a big project and we can’t wait to present it to all the viewers,” says T.G. Sheppard.

At the request of fans everywhere, Lang has issued a Deluxe EP featuring her song, “I’m Not Going Anywhere” after being seen and heard across the United States as part of Ascension Hospital’s ‘Your Care Is Our Calling’ campaign, honoring caregivers and the patients they serve. The Deluxe EP includes both a piano and orchestrated version, and a story behind the song as well as a music video, available now. Fans can listen to the song HERE or watch the entire official music video HERE.

T.G. Sheppard’s career continues to soar as he consistently tours the country and was recently featured on a second installment of The Best of The T.G. Sheppard Show’ on SiriusXM’s Elvis Radio Channel 75. The special highlighted Sheppard’s most popular interviews with some of the biggest names in entertainment. The T.G. Sheppard Show airs regularly on Fridays from 3-7 pm ET on SiriusXM’s Elvis Radio channel 75 and is also available on-demand worldwide with the SiriusXM app and Pandora NOW with a standard SiriusXM subscription. His latest album, Midnight In Memphis is his first country solo project in over two decades that offers a wide array of songs about love and heartbreak. Sheppard also proves there is no slowing him down with an abundance of tour dates on his schedule, linked below.

Tune in for free on TBN or live stream on TBN.tv. TBN is also available on iOS, Android, AppleTV, Amazon fireTV, Roku or download the TBN app on Google Play or the iOS App Store. For more information, visit tbn.org.

About Kelly Lang:
Kelly Lang is a prolific singer/songwriter from Oklahoma City, Oklahoma, who has called Hendersonville, Tennessee home since moving there as a child. Growing up in country music, her father, Velton Lang, was the longtime road manager for superstar Conway Twitty. Being around great legends in the music business gave Kelly the burning desire to pursue her own personal music career.