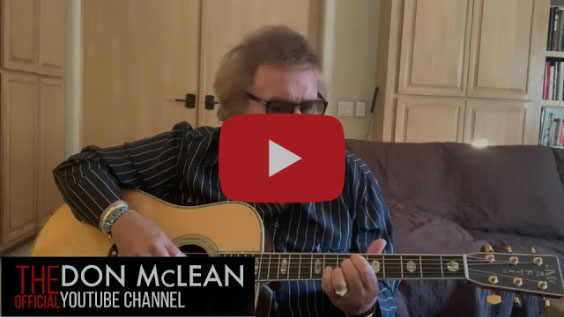 NASHVILLE, Tenn. – Songwriter Hall of Fame member and BBC Lifetime Achievement Award recipient Don McLean continues to be creative, even in times of quarantine. McLean, always wanting to help others, took to his iPhone and made a very special video showcasing unique tips and techniques on playing the guitar, songwriting and live performances. Teaming with USA Today, this exclusive video release is available.

As social distancing continues, this is the perfect video for anyone looking to gain knowledge of the music industry, songwriting process, or simply desiring entertainment from a lyrical legend. As part of the nearly thirty minute video, fans and aspiring artists will not only enjoy learning historical facts about Don’s career, they will also learn many helpful tools that take a lifetime to craft through success, failure and everything in between.

“I always get asked how I play certain notes on the guitar,’ says McLean. “I figured since I have some downtime I might as well help show all those people who have asked over the years how I do it and it was pretty fun actually.”

To keep up with everything Don McLean and to be a part of his upcoming releases visit his website and follow his social channels linked below.

About Don McLean:
Don McLean is a Grammy award honoree, a Songwriter Hall of Fame member, a BBC Lifetime Achievement award recipient, and his smash hit “American Pie” resides in the Library of Congress National Recording Registry and was named by the Recording Industry of America (RIAA) a top 5 song of the 20th Century. A New York native, Don McLean is one of the most revered and respected songwriters in American history. After paying his dues in the New York club scene in the late ‘60s, he went on to score mega-hits like “Vincent (Starry, Starry Night),” “Castles in the Air” and many more. His catalog of songs have been recorded by Madonna, Garth Brooks, Josh Groban, Drake, Weird “Al” Yankovic, and countless others. In 2015, one of McLean’s four handwritten manuscripts of the lyrics to “American Pie” was auctioned by Christies, selling for just over $1.2 Million. 2019 honored Don with a star on the Las Vegas Walkway of Stars and his song “And I Love You So” was the theme for Prince Harry and Megan Markle’s wedding. Now in 2020, Don signed a recording contract with Time Life to release his catalog of recordings as well as the much anticipated new album Still Playin’ Favorites, which will be released in the Fall. “American Pie” will be featured in the Avengers Black Widow and the Tom Hanks movie BIOS and much more to be announced. And when you think things are slowing down, not so for Don McLean! 2021 will mark the 50th anniversary of American Pie with a World Tour to follow.