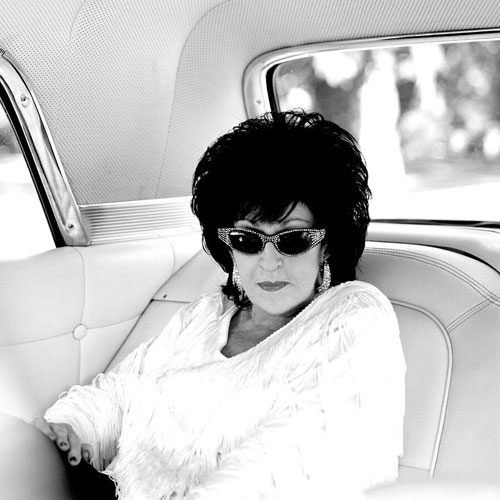 NASHVILLE, Tenn. – Known for her energetic stage shows and pioneering presence as a female artist, the one-and-only Wanda Jackson – popularly known as the Queen of Rockabilly and the First Lady of Rock & Roll – has returned to Nashville to work on new music. Fellow female Rock n’ Roll Hall of Fame member, Joan Jett, is producing the project. The as-yet-unnamed project is currently anticipated for a 2019 release. After decades of recording covers, Jackson hit the writing room for this project, co-writing with many hit Nashville songwriters including Angaleena Presley of the Pistol Annies. “Ex’s and Oh’s” singer Elle Kingalso contributed a song to the project.

Jackson is excited to go into the studio at the end of this month in Nashville to record vocals for the project with four-time Grammy Award winner Vance Powell. Powell also assisted on Jackson’s 2011 collaboration project with Jack White; The Party Ain’t Over, which peaked at #17 on Top Rock Albums, and #58 on the Billboard Hot 200. The album also earned rave reviews from critics, as well as landing Jackson guest spots on such programs as Conan and The Late Show with David Letterman.

“The songs on this project are very dear to my heart, as a lot of them are based on my own life experiences,” said Wanda. “I’m really looking forward to sharing what Joan and I have been working on.”

Wanda Jackson has landed more than 30 singles on the Country and Pop Music Charts between 1954 and 1974. With over 40 albums to her credit, Wanda has proven to be an enduring and genre-defying legend of American music, who is still creating and establishing her legacy as an artist. In 2009 Wanda Jackson celebrated her induction into the Rock & Roll Hall of Fame.

The announcement of Jackson’s new music comes nearly a year after the release of her autobiography Every Night Is Saturday Night: A Country Girl’s Journey to the Rock & Roll Hall of Fame. Wanda tells the story of being discovered by Country Music Hall of Famer Hank Thompson, why she refused to return to the Grand Ole Opry for more than fifty years, the challenges she and her integrated band, The Party Timers, faced when touring in a less racially tolerant era, her relationship with Elvis, and how she ultimately found the love of her life.

Jackson has also secured booking representation by Deric Brown at artistLIVE in Nashville, and is now accepting offers for Wanda to perform.

“Wanda is a legend!” said Brown. “I’m very honored to have the opportunity to represent her here at Artist Live!”

About Wanda Jackson:
Originally hailing from small-town Oklahoma, Wanda Jackson came onto the music scene at the young age of 17 with her 1954 single, “You Can’t Have My Love.” Her unique growl electrified her audiences and fans, quickly earning her the title “Queen of Rockabilly.” “Hot Dog! That Made Him Mad” and “Let’s Have A Party” were two of her earliest hits. She made her chart debut with crossover hits such as “Right Or Wrong” and “In The Middle Of A Heartache,” which were Top 30 hits on both the Billboard Country charts, as well as the Hot 100. Her 1963 Grammy-nominated album, Two Sides Of Wanda, helped to further introduce her to Country fans with hits like “The Box It Came In” and “Tears Will Be The Chaser For Your Wine.” In recent years, appreciation of Jackson and her music have grown to include multiple generations. She is a member of the Oklahoma Music Hall of Fame and the Rockabilly Hall of Fame, as well as the Rock and Roll Hall of Fame. She was named as one of CMT’s 40 Greatest Women In Country Music during a 2002 special, and also presented with the Lifetime Achievement Award for Performance from the Americana Music Honors and Awards in 2010. In 2011, Wanda released The Party Ain’t Over, a collaboration with Jack White, earning rave reviews from critics. In 2012, Wanda released her last album, Unfinished Business, with Americana musician Justin Townes Earle producing. In 2017, Wanda released her autobiography, Every Night Is Saturday Night: A Country Girl’s Journey to the Rock & Roll Hall of Fame.