William Lee Golden and The Goldens Receive Proclamation And Key To The City At Brewton Porch Fest In Brewton, Alabama 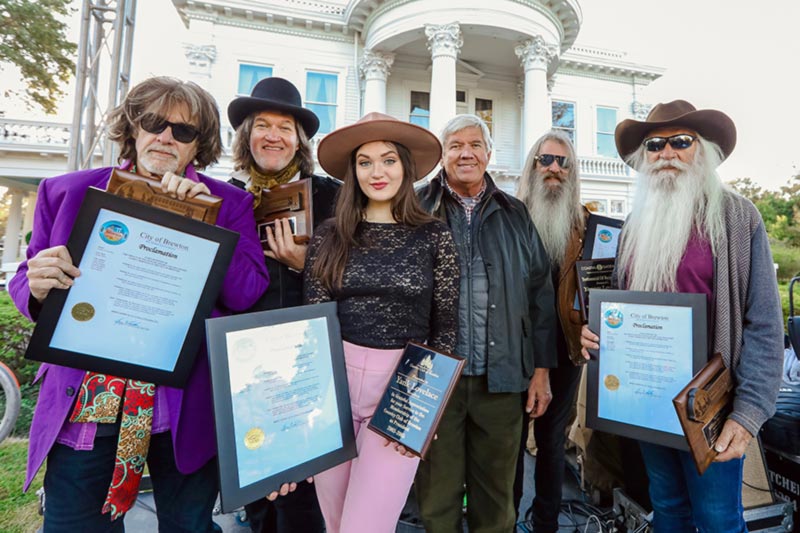 William Lee Golden Presented with a Key to the City

BREWTON, Ala. – Country and Gospel Music Hall of Fame and Grand Ole Opry member William Lee Golden and his sons ‘The Goldens’ appeared at the 2021 Porchfest in Brewton, Ala. over the weekend. The annual event put together by The Greater Brewton Area Chamber of Commerce, Mayor Yank Lovelace, and the City of Brewton, brought the neighborhood together through music to celebrate and encourage a sense of community. Homeowners of Historic Belleville and Evergreen Avenue offered their porches as stages where country, gospel, blues, Southern rock, and many other genres of music were performed throughout the family-friendly afternoon. The Brewton native and his sons kicked off the festivities by opening the event on the Main Stage in front of one of the town’s historic homes, the Downing-Craft Home. William Lee Golden and The Goldens were honored with a proclamation and Key to City during a surprise presentation during the show!

“It’s always a wonderful time going back home to where it all started,” shares William Lee Golden. “I still own my family’s home place where I grew up and there are so many memories there. Getting to come back and perform with my boys was a wonderful experience and to be given a key to the city by Mayor Lovelace was a wonderful surprise!”

“It is hard to quantify the impact of a talent like William Lee Golden on his hometown,” said Mayor Yank Lovelace. “He grew up on a farm like many here did, played music with his family, sang on our local radio station, WEBJ, and sang in church. He played football, sang in school chorus groups, and got a job at the local paper mill before the world found out about him and that magnificent voice. As part of the Oak Ridge Boys, his name and image are recognizable the world over and he never left Brewton out of his thoughts, and always spoke the praises of his hometown. His is one of two names listed on signs welcoming people to our city. The Golden Family is part of the fabric of our community, and we are forever grateful for the contributions made that help make this the greatest community in the world.”