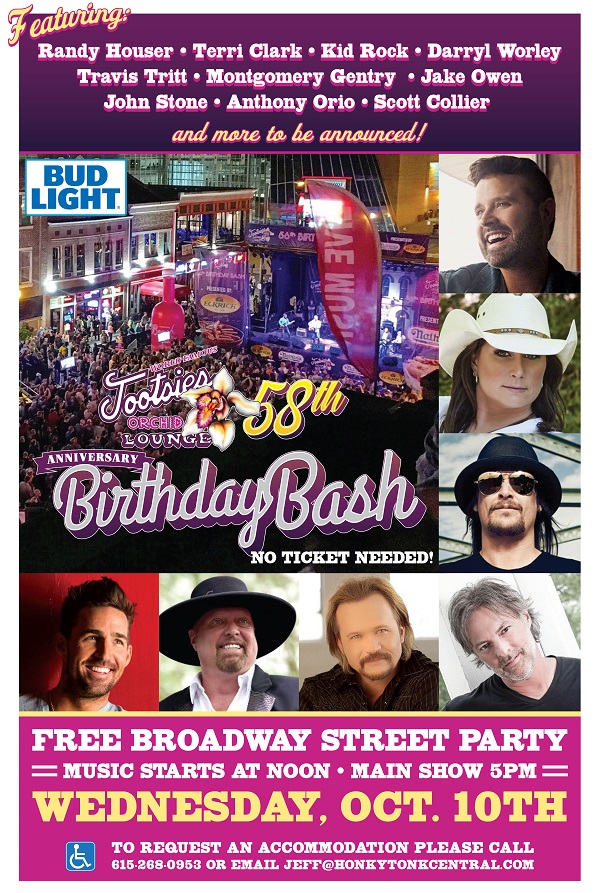 Past Surprise Guests Include Dierks Bentley, Colt Ford, Jamey Johnson & More — You Never Know Who is Going to Drop By!

‘Ty, Kelly and Chuck Mornings’ hosts Ty Bentli, Kelly Ford and Chuck Wicks will be on hand to kick off the event with ‘NASH Nights Live’ co-hosts Shawn Parr and Elaina Smith rounding out the evening emcee duties!

Tootsie’s Birthday Bash has become one of the most highly-anticipated annual events on lower Broadway. Each year it gets bigger and better,” said Tootsie’s owner Steve Smith. “Many artists started at Tootsie’s, and having them come back year after year is a great honor to the legacy and memory of Tootsie Bess! Everyone should come out and experience that magic on our 58th birthday.”

Tootsie’s Orchid Lounge Annual Birthday Bash attracts some of the biggest stars in music, including surprise appearances. The event, which takes place Oct. 10th on Broadway between 4th and 5th Avenue, will host entertainment on an outdoor stage throughout the day and is FREE to the public.

About Tootsie’s Orchid Lounge:
Tootsie’s Orchid Lounge has operated across the alley from the Ryman almost continuously since 1960. Its proprietor from 1960 to 1978, Hattie Louise “Tootsie” Bess, bought the lounge called “Mom’s” and named it for herself. According to tradition, a painter mistakenly painted the exterior orchid purple. The color was never changed and became Tootsie’s signature color. Over the years, she served such famous customers as Kris Kristofferson, Faron Young and Willie Nelson when they were still up-and-coming artists, and Tootsie was well-known for her generosity toward struggling musicians. The photo and memorabilia-lined walls are called “Tootsie’s Wall of Fame.”

Today, Tootsie’s Orchid Lounge is a must-see Music City destination for tourists and is frequented by locals, including some of the biggest names in country music, who often drop in and surprise patrons with impromptu performances. Kenny Chesney with classic rock icon Steve Miller, Keith Urban, Kix Brooks, Montgomery Gentry, Kid Rock, Steven Tyler, Randy Houser, Jamey Johnson, Dierks Bentley and Hank Williams, Jr. are among the artists who have recently performed there. For additional information, visit www.tootsies.net.